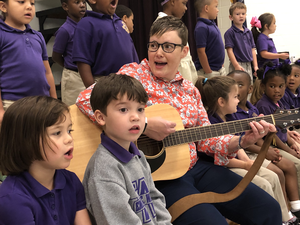 Rebecca Holmes, a district master teacher in music in the St. John the Baptist Parish Public School District, has been chosen to receive the Yale Distinguished Music Educator Award.

The award will be presented at the 2019 Symposium on Music in Schools at the Yale School of Music in New Haven, Conn., in June.

Holmes is one of just five exemplary music educators and five exemplary teaching artists from across the country chosen to receive the award and give their input during the symposium.

Held every two years, the Symposium on Music in Schools is a gathering of policy leaders and practitioners from across the country to discuss topics relating to music education in public schools. The topic of this year’s symposium is the preparation of music educators and teaching artists in higher education with the goal of developing a set of principles by which higher education can prepare music educators and teaching artists who are well-equipped to teach preK-12 students in twenty-first-century music ecosystems.

Holmes will join a team of national organization leaders, music education professors, school of music leadership, and experts in teaching artistry and public policy. The symposium will be structured as a “think-tank,” in which participants will work in large and small groups to develop the set of principles for national dissemination.

Holmes said she is excited to discuss how math, science and other subjects can be used along with music to educate the whole child and to talk about how educators outside the music department can become involved.

Holmes was nominated for the award by the National Association for Music Education and the VH1 Save the Music Foundation, who identified her as an exemplary music educator who can bring valuable expertise and perspective to the symposium.

“The work that we’ve done to rebuild a music program – we’ve only been at it six years – so to be recognized by NAfMA and VH1 is amazing,” Holmes said. “It’s hard work but our kids deserve every minute of it.”