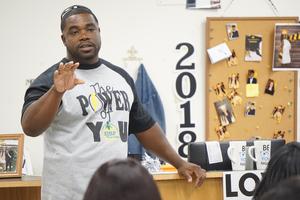 Cory Butler has been named the next interim superintendent of the St. John the Baptist Parish Public School District.

“What I’d like is to progress this district forward in terms of student achievement and move this district forward as we work to achieve more certified teachers and just to guide education as a whole,” Butler said. “I want to thank the board for this opportunity to become a leader once again.”

Butler has served as Director of Child Welfare and Attendance for the district for the past four years. Butler began his tenure in the St. John the Baptist Parish Public School District as principal at East St. John High School.

Prior to joining the district, he was an education consultant with the Louisiana Department of Education. He served five years as principal at Ellender Memorial High School in Houma and two years as an assistant principal at H.L. Bourgeois High School. He was also a principal at Schwarz Alternative School in the Recovery School District. Prior to his leadership positions, he served as a teacher in Terrebonne Parish for more than a decade.

“We’ve appointed Mr. Butler to bring continuity and stability to the superintendent’s office while we search for our next permanent superintendent,” School Board President Patrick Sanders said.

Butler said he plans to increase the visibility of the central office leadership and curriculum teams in schools and to promote solidarity across the district.

“I want to work cohesively with the schools and the school communities so as we become galvanized we can progress the school district in student achievement and teacher recruitment,” he said.